‹ Previous Topic Next Topic ›
Posted by

Wuler_ is a tomato project of mine (see my ID system if you want to make sense of how I name plants within each project), to deal with segregations of and/or crosses with the unstable B.S.X. tomato seeds I received in 2019 (which have proven pretty cool). This is to distinguish it from the other B.S.X. tomatoes floating around that don't quite match mine in description, and to help me identify and talk about each plant better (without having to explain stuff that might be).

Wuler_ doesn't have any previous meaning to this tomato. It's a random name composed of letters that exist in the names of some of its possible ancestors. Its likely possible ancestors (as far as I know) include these:
- Brandywine Sudduth
- Black Cherry
- Karma Pink
- Any of one of four Brandy Boy cross F3s I grew in 2020 (three tart ones and one near-multiflora one).

My initial seed was labeled B.S.X. and came from HudsonValley of Tomatoville, in 2019. Here's the information I wrote in my records about it:

I grew one plant in 2020. The fruits did not match the description I've read about for B.S.X., but were actually large and black instead of small and pink. It fruited heavily in July (not much beyond that; maybe in early August, too), and I was super impressed by how many large fruits we had early on in the season. The taste was just okay (but not offputting). The plant was potato leaf. I saved seeds and grew three plants in 2021 (because it was so prolific with such large fruit, and nice heat-tolerance and cold-tolerance early on).

In 2021, however, the fruits turned out to be pink, instead of black. They were somewhat smaller, but still not small (with variation in size among the plants). The taste was excellent. They fruited heavily in July/August again, in the heat (not much beyond that again). All three plants were potato leaf, again.

I suspect an additional cross happened in my garden in 2020 with a pink PL father (and/or in HudsonValley's garden with a black PL father), considering it was supposed to be pink in 2020, but was black in 2020, and then turned out to be pink again in 2021 (I'm not sure that color can change back and forth like that instead of just back or just forth). Possible crosses from my garden in 2020 were the aforementioned Brandy Boy cross F3s and Karma Pink. Anyway, even if it's not an additional cross, it's still a segregation from the initial B.S.X.'s description. So, I figure I better give it it's own project name instead of calling it BSX, or a BSX cross all the time. So, Wuler_ it is (that's a project name--not an actual variety name).

Anyway, I had three volunteers in my garden this year (I didn't save seeds last year, because we ate them all and it didn't grow any more by the time I wanted to save seeds--so, I was pretty glad that it volunteered). I'm confident they're from this line, based on their appearance, early fruiting, fast plant growth, heat-tolerance, how they're potato-leaf, and such. If it were the other possible PL plant, they wouldn't be growing and fruiting this fast, I'm sure.

Okay, so, I'm calling the plant from 2020 Wuler_A, the plants from 2021 (from east to west) Wuler_B, Wuler_B0, and Wuler_B1. And because I don't know which of those the volunteers came from, I'm just going to call them Wuler_C (was v22_A5), Wuler_C0 (was v22_A6), and Wuler_C1 (was v22_A7). If I grow more seeds from the initial BSX packet, I'll call them Wuler_A0, Wuler_A1 and so on, unless they happen to match BSX's description in being pink (then I'll know those probably really are BSX). Again, Wuler_ is a project name to help me keep track of stuff (it's not an official variety name). The individual names are plant names within the project.

You've probably seen some of the fruit already if you looked at pictures of my fruit last year (look for a stainless steel bowl of miscellaneous fruits, and the big-ish pink beefsteaks are probably from Wuler_B1).

Wuler_C0 germinated (as a volunteer) on June 4th and set fruit on July 10th or 11th. I think that's 58 days. It has multiple fruits already. Let's see how long they take to ripen, and how big they get! :) Wuler_C and C1 have fruit, too, and bigger plants (they're somewhat older). I have them in cages, this year (for the first time in the Wuler_ project). I was getting tired of getting them mixed up with other plants later in the season after they were done setting fruit (so, this should help to keep them separate).

Here are pictures of this year's plant, today: 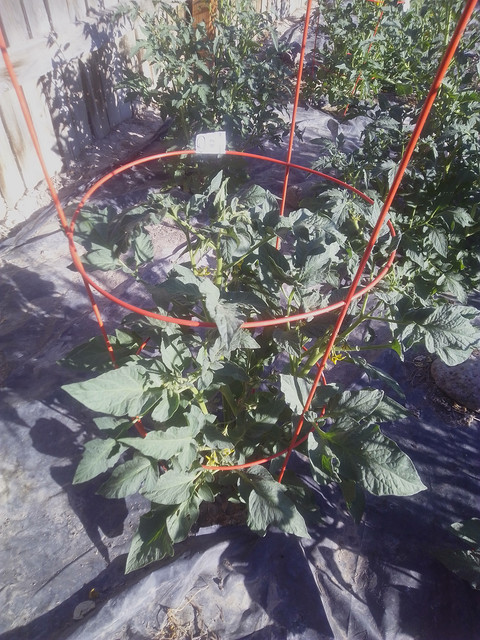 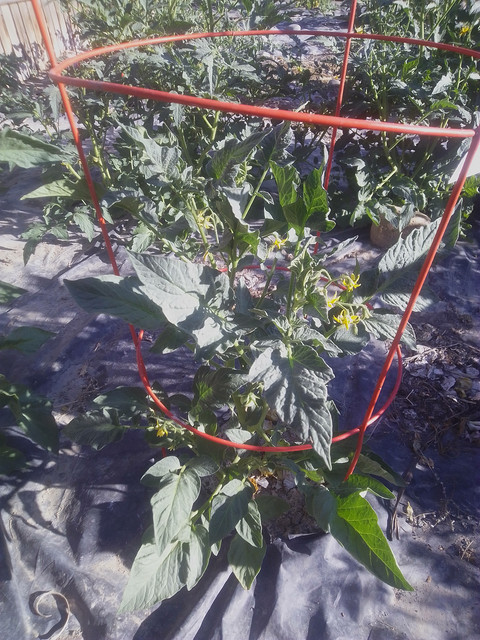 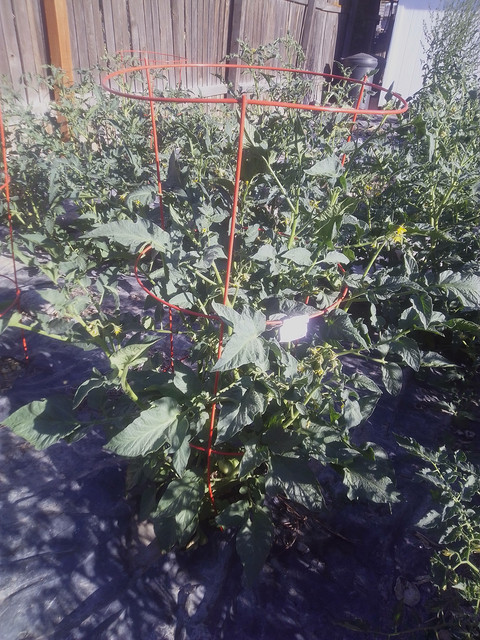